This is my adaptation of Jacquelynne Steves Save the Bees BOM which began back in August. Since I was away on a road trip through Utah and Colorado for most of August, I felt a bit rushed to get the first block done when I got home, and chose to deviate from Jacquelynne’s original flower appliqué design for this block (my block is in lower left corner). I used an embroidered tea towel to which I added the embroidered bee.

For September’s BOM, pictured in the lower right corner, I designed the flower appliqué to better match my first block, intentionally winding it on a post so that I could do a second accompanying block with a beehive sitting atop the post. I wanted to incorporate a memory from our road trip into this quilt, and what could be more fitting than a beehive! The beehive is the state symbol of Utah, which we saw a lot on our trip since this is on all their state highway signs. The two blocks on the right side are what I made in September.

October’s block is the one with the hexagons in the upper left and November’s block is the bee in the center. Since I had varied the design from the start, I had planned on making the third and fourth blocks and then choosing one or the other for the final quilt. However, once I had everything on my design wall together, I liked them all so much that I didn’t want to have to choose between these two. Instead, I opted to further deviate from the original design for this quilt to make it what it has become.

I used a lot of fabrics from my stash, many that were Pieces of the Past, including two embroidered tea towels, the cute bee fabric behind the hexagons, and the fabric shown below which is a Debbie Mumm print from 1995. The stamp on the fabric says Debbie Memm – perhaps like coins, this misprint makes it more valuable? 🙂 This has been a fun project to participate in. I learned new things like how to make an HRT, as well as dusting off my appliqué skills. 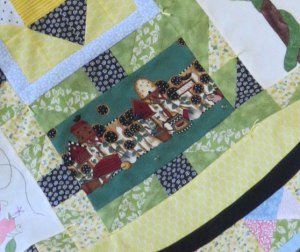 Why the name? I grew up hearing the phrase The Bees Knees, and I like the silliness of it. In looking up its origin, this phrase along with the cat’s whiskers, the cat’s pajamas all became popular in the U.S. in the 1920s (long before I was born 😉 ). Here are some other similar phrases that didn’t endure: the eel’s ankle, the elephant’s instep, the snake’s hip and the capybara’s spats. This last is hands-down my favorite! (source: Wiktionary)

This was donated to the County of Ventura, Children & Family Services, for a child in foster care in December 2018.