This recent finish is the largest quilt I’ve made, measuring 90″x90″. I quilted it on my regular sewing machine, and because I didn’t want to wrestle the entire thing during the quilting phase, I opted to build it in two triangles that I then joined after quilting – sort of quilt as you go (QAYG), but on a much larger scale. I had a few lines I had to quilt on the machine after it was all together, but this seemed more manageable than having to do all the quilting at its completed size. Due to its size, I had to do a lot of the final trimming, pinning, etc. on my entryway floor, as my sewing room does not have enough space for something this large to be laid flat and still work around it. I sewed the front seam by machine, and then hand sewed the batting and back seam.

The center pattern is Acorn Caps from Fat Quarter Shop, using Moda’s Harvest Road fabric by Lella Boutique. I also mixed in some Tonga Treat batiks and some scraps from my stash. I set the Acorn Caps design on point, added a 1″ border in brown, and then did simple patchwork for the setting triangles. The final border and the pillow shams are a coordinating batik. 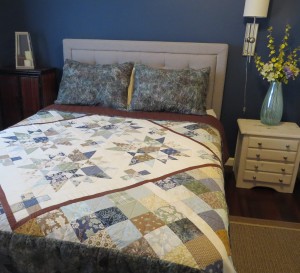 I made this for my daughter and son-in-law, who love to backpack. The colorway resembles those seen in nature: blues for the sky, lakes, rivers and creeks; greens for the trees, shrubs, and plants; and brown, not only for the dirt, but the trail that becomes the epicenter of one’s day. I did some of the quilting to mimic the lines on a topographic map, one of the most important items in one’s pack.

I chose to name this Further for a few reasons. On the many treks that we’ve done over the years, our daughter often wants to go farther up the trail, wanting to see what is beyond the next mountain or bend in the trail. With the Sierra Nevada as our backpacking playground, it’s difficult not to give into the allure of what lies further ahead.

In 2009, my husband and I, along with our daughter and her husband, and my brother-in-law and his son, hiked the John Muir Trail, from Yosemite Valley to Mount Whitney. After three weeks on the trail, it was difficult to go back to everyday life at home, and not continue further on the trail. Backpacking becomes addictive in that way.

The mountains are calling, and I must go
~ John Muir

This quilt is also the furthest I’ve pushed myself in quilting.